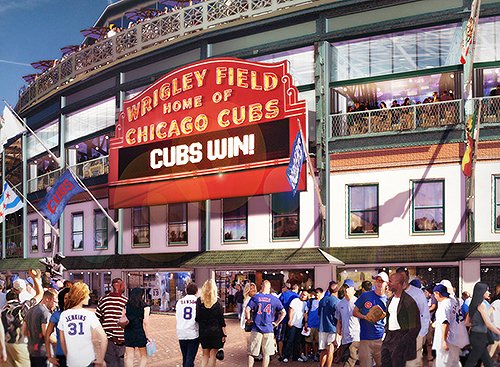 Rendering of what the new front of the ballpark could look like.
(Graphic/WrigleyField.com)

After months of grinding debate, the Cubs’ plan to renovate Wrigley Field passed its final hurdle Wednesday on a wave of relief as it received unanimous Chicago City Council approval.

The five-year, $500 million renovation will increase advertising within the ballpark to bankroll updating facilities and developing the area around the field without a public subsidy. The plan had faced derailing since its announcement as concerned parties attempted to reign in the scope of the project.

“I happen to think we’ve struck the perfect balance between competing interests,” Mayor Rahm Emanuel said after the vote.

While Wednesday’s meeting signaled the OK to move forward, it was on Tuesday that the plan cleared its biggest obstacle when concessions from the Cubs and promises from the city convinced opponents of the plan to relent. Those included suspending indefinitely a proposal for a pedestrian bridge over Clark Street indefinitely and implementing a 10-year restriction on outfield signs, other than two already approved.

There was no word on a precise start date -- though speculation has clubhouse changes coming in the fall -- for the renovation as the Cubs still face unanswered questions about some details. That includes the team’s ability to add new signage after their revenue-sharing agreement with rooftop owners expires in 2023.

Uncertainty also surrounds a patio behind the right-field bleachers that would overhang Sheffield Avenue, requiring the field’s wall to be moved eight feet and remove a lane of traffic. The patio could help the Cubs avoid a key holdup in starting the renovation in the form of a legal battle over views from rooftop bleachers as the patio would allow a 650-square-foot neon script sign to be moved far enough back to give rooftop fans an unobstructed view of the ballpark.

DNAinfo Chicago reported late Wednesday that the patio could also include a pedestrian bridge that would replace the controversial walkway initially planned for Clark Street, instead connecting right field to the Addison Red Line Station over Sheffield Avenue.

Ald. Tom Tunney (44th), the plan’s most outspoken opponent until a surprising about-face last week, agreed to support the renovation after 44 changes were made at his suggestion during months of debate. During the meeting, the alderman took the opportunity to voice his enduring concerns for the preservation of Lakeview, which take root in the shortcomings of previous Cubs ownership.

“We welcome the investment, we welcome change” Tunney said, speaking on behalf of Lakeview residents Wednesday.  “But we also want respect.”

Tunney, who has served the ward encompassing Wrigleyville since 2003, blasted the Tribune Company, the Cubs’ previous owners, for failing to invest in the Lakeview community before selling the team to the Ricketts family in 2009.

Emanuel, who found himself in the position of brokering a deal between Tunney, the Cubs, and the city, commended the alderman as a “tireless advocate” who matched the determination of the team’s ownership.

Before the final vote, Tunney reminded the city council of the Cubs’ responsibility for maintaining the two-way relationship between the team and Wrigleyville.

“The Cubs need to be the catalyst that helps other businesses grow, not snuffs them out,” Tunney said.

While planning the massive renovation of the 99-year-old ballpark, and weighing concerns of its landmark status against the need to modernize its facilities, the Cubs looked to recent makeovers of Boston’s Fenway Park for inspiration, the only field older than Wrigley.

The $300 million set to be spent on the aging ballpark will net a Jumbotron scoreboard, a new clubhouse, batting tunnels, new suites and press facilities, club-level dining, a new Captain Morgan Club and get expanded dining and bathrooms, which have been a longtime complaint among fans. The remaining $200 million will be spent renovating Wrigleyville, including adding a 91-foot hotel and office space at Addison and Clark.

The 4,650-square-foot Jumbotron and 650-square-foot outfield sign had been a point of contention between the Cubs and nearby rooftop owners who said the signs would block spectators' views and cost them money. The issues largely have been worked out during community meetings and the hearings, where the signs were shrunk slightly, though the rooftop owners could still file a lawsuit.  The decade-long restriction that will limit additional outfield signage has been seen as an attempt by the city to make good with the rooftop owners and protect their investments.

“I think the Cubs have shown a tremendous ability to compromise,” Dean Skora, a Wrigleyville resident who witnessed the vote, said. Skora said he is particularly excited about the impact the hotel will have on Lakeview’s limited lodging for visitors.

As an architectural buff, Skora admitted that he is a bit cynical about the aesthetic effect of the outfield signage.

“The architecture renderings don’t give you a great idea of what its going to look like, but honestly its about the cost,” Skora said.  “You have to fund it somehow and they’re doing it right and I respect them for that.”

Although he was surprised the plan for the pedestrian bridge was postponed, Wrigleyville resident Michael Jackson was happy the renovation was approved without costing the public a dime.

“The simple fact that it’s not costing the taxpayers anything, how can you argue with that?” he said.

Video: This promotional video from the Cubs, posted at WrigleyField.com, shows some of the structural changes that will be made to the ballpark.