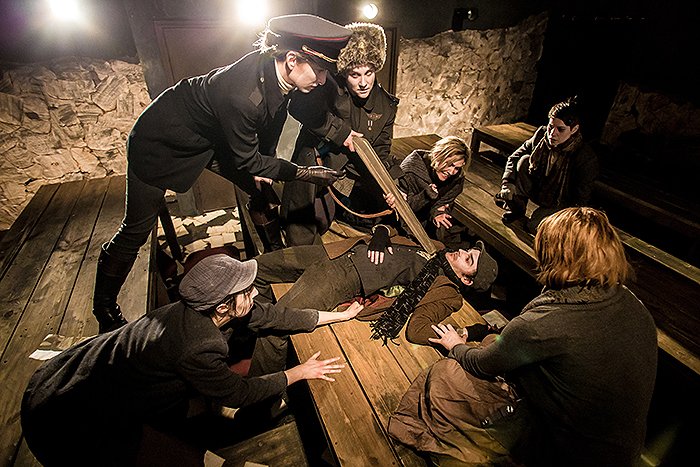 Anyone taking a walk along Broadway—the street in Chicago’s Lakeview neighborhood, not the ritzy theater district in New York City—and they come across Oracle Productions, a storefront theater that produces free performance art for the public.

Oracle was founded in 2005 as a not-for-profit theater company, and transitioned to Public Access Theater in 2010. Tickets to theater productions, film screenings, puppet shows and other programs are free for anyone.

The company is funded by donations, including a sponsorship program called “The Forty 4.” Sponsors have guaranteed seating throughout the season. As of March 16, Oracle has already served nearly 1,400 people this year, according to their Facebook. Executive Producer and Board of Directors member Ben Fuchsen likens their system to how a food bank operates.

“I believe so deeply that art is necessary to live fulfilled and healthy,” Fucshen said, “it is built into the human soul that we have to make art.”

A stigma surrounding theater is that it can be elitist and expensive. Fuchsen said some people are weary of taking the risk of spending money on something they might not enjoy. To destroy the economic barrier and expose the public to the arts, Oracle found giving it away for free was key.

“We see a lot of people who say it’s their first time going to an art event,” he said, “we see people from all walks of life.”

Actors are volunteers, however the quality of the theater is never hindered. While traditional theaters work with set scripts, Oracle creates original content and unique adaptations. Fucshen and Executive Director Brad Jayhan-Little work full time without salary to develop the company and continue expanding the reach of their mission.

They also assist artists in the Chicago community. B*Sides is a program Oracle offers where artists are given the opportunity to showcase their work. In exchange for their creativity and passion, Oracle gives them a space, promotion, and a percentage of the donations earned.

Marc Dunworth of the Dunworth Puppets had a showcase March 15 and 16. A fifth show was added due to demand. In his ten years of professional experience he has worked for national touring productions and created costumed characters for Disney theme parks and Broadway shows before creating his one-man company. At Oracle, he performed a marionette variety show called “Here Comes the Circus!”

While meeting with Oracle, Dunworth mentioned the company had yet to focus on the children.

“Who is in more need of exposure to the arts than children? With a popular culture that seems to put more and more stress on technology as the major source of entertainment, having a company that can offer something like this for free to the public is amazing,” he said.

Dunworth said he immediately received bookings from people who saw him perform with Oracle. 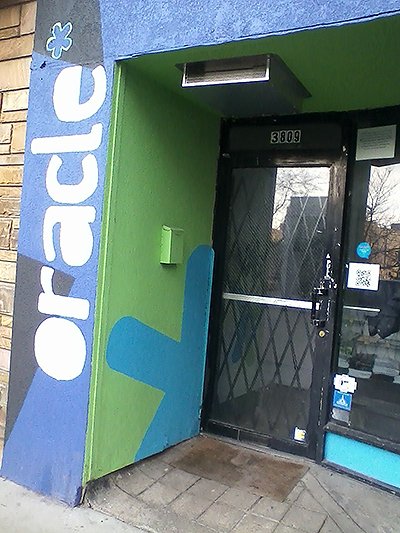 Oracle is changing that. Fucshen said art “is an ancient form of communication” that has been around “longer than religion, and longer than politics.” They work to keep quality theater available in the community to inspire and help people fall in love with the arts.

Oracle has even made efforts to spread Public Access Theater internationally. In 2011, Fucshen led a group to Belarus to be the first Americans to perform at the Belaya Vezha Theatre Festival. He was “really proud of the notion that free art can extend across the globe.”

Oracle Productions continues to grow alongside other theater companies and looks to develop a relationship with the Lakeview neighborhood. With a goal of moving into a bigger space—they have space for just over 40 seats now—Fucshen and the rest of Oracle hope that the more seats, the more exposure their free theater will get. While their mission is steadfast, the challenge of continuing to spread the word poses its difficulties.

“We’re trying to get this to the next level so [Public Access Theater] catches fire,” he said.

The people of Oracle and those who work with the company exude passion and profoundly believe in the importance of art in a community. “Providing art to others in one of the most important things you can give to someone else,” said Dunworth, “it’s the one bit of true magic that we as human beings possess.”