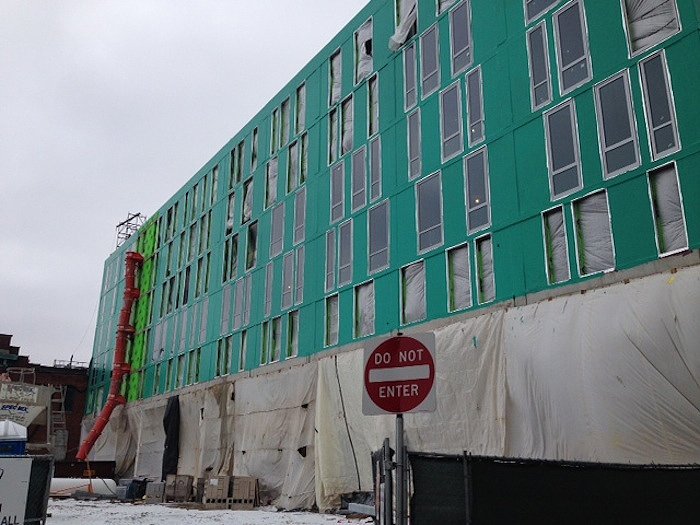 The exterior of the senior center was built this winter. (Photo/Robert Martin)

By Robert Martin and Maria Garcia

The LGBTQ senior housing also known as the Town Hall Apartments, a $26 million development, will be fourth in the nation and is getting much needed support from Lakeview residents.

The construction of the 79-unit apartment building will reuse the space of former 23rd District Town Hall District police station at 3600 N. Halsted St, just a block south of the Center on Halsted.

Heartland Housing, which is Chicago’s largest anti-poverty organization, and the Center on Halsted, a community-based group dedicated to assisting the LGBTQ, have been collaborating on the project.

The Town Hall Apartments were to originally open in the summer of 2014, but Nadia Underhill, Associate Director of Real Estate Development for Heartland Housing said as of Feb. 28 they are 58 percent complete with the construction of the building.

“We’re still working out the details, but initial marketing should begin in April,” Underhill said.

After 10 months of construction, Megan Jackson, senior services case manager for the Center on Halsted, said there will be no waiting list will be available until June, but current interest list is close to 300 people.

“These numbers really show how big of a need it is for LGBTQ seniors to find housing in an atmosphere where they’re able to feel comfortable being open with their gender or sexuality,” Jackson said.

Both Heartland Housing and Center on Halsted will be reviewing resident applicants later this summer.

All applicants are required to be 55 years and older and will need to go through the Chicago Housing Authority and will be chosen based off their higher needs for assistance. Non-LGBTQ people are welcome, but they will be reminded that it is LGBTQ friendly.

“We’re looking for people who are HIV positive, homeless, dealing with substance abuse, and with an income no higher than $30, 000,” Jackson said.

Once applicants have met Heartland qualifications, residents will be chosen through a lottery system so that everyone may have an equal opportunity.

Heartland Housing is in charge of property management while Center on Halsted is working to ensure seniors have basic case management social services.

Jackson and her partner will be managing programs and services at the new housing center that will assist them with different resources and social services they might need such as getting elderly people connected to an affordable health insurance.

“By the fall we will have fulfilled their housing needs, but we want to fulfill their other needs to make sure that they can come out of the center being able to manage doing many things they couldn’t,” Jackson said.  “We want to ensure they are getting all these services so once they do leave our building, they will the ability to go out into the world and do what they need to do, with little help from us.”

Currently at the Center on Halsted case managers provide seniors with free social events designed for seniors’ personal enrichment. Some of the events offered at the Center include Open Café, Creative Writing for seniors, Fall-Prevention Workshop, Ask the Techie, Simple but Delightful Recipe Makeovers and Rejuvenate Yourself: Mind Body, and Soul. The Center also has yoga classes for seniors and various support groups.

Case managers said they are planning to provide seniors with many of these social events at the new housing center.

“We want to give them more than just a housing complex, we want to make sure they are engaged,” Jackson said.

“I had begun to hear about gay retirement villages in places like Fort Lauderdale and Palm Springs. I was happy but not surprised to see Chicago and the Center again in the forefront here,” said Gary Cestaro, professor of LGBTQ studies at DePaul University. “Just to have a facility like that in the heart of the community, virtually adjacent to the Center, speaks volumes about the community¹s commitment to its older members.”

Jackson said Heartland Alliance and the Center are using this project as an opportunity to address the growing concern for many LGBTQ seniors who live in poverty and struggle the most with finding affordable housing.

“The most common reason accountable for their income struggle is related to their entitlement to their spouse’s social security benefits,” Jackson said. “There are many instances where a couple has only one spouse bringing in all the income and the moment they pass away, the other partner loses everything because they don’t have social security benefits since they were not legally married.”

Although there is increasing awareness and support for the new development, Jackson says some people within the communitythink the money could have been spent on something else.

“I think younger people who haven’t reached the age where finding affordable housing is an issue doesn’t fully understand how hard it is for the older generation,” Jackson said. “Just now we’re getting things together for marriage equality, and current seniors didn’t have that before.”

The current plan is that the six-floor building will include 30 studio apartments, 49 one-bedroom apartments and 4,450 square feet of commercial space, 20 covered car parking spaces along with parking spaces for bicycles. The development will be designed to accommodate eco-friendly standards.

The business that will occupy the retail space on the bottom floor remains undecided, but Jackson ensures that it will be something that will benefit senior LGBTQ and are considering a health clinic.

This project is just one of the many things the Center plans on doing for the LGBTQ elderly.

“This is the first generation of LGBTQ people who came up at a time where their homosexuality was seen as a mental disorder, and fought for the benefit of younger LGBTQ people,” Jackson said. “Even with the benefits, there is still a long way to go. It’s time for the younger people to join the fight so the older LGBTQ people get a chance to reap some benefits from it.”