By Giovanni Velez and Joseph Crump |

This Mercedes is one of thousands of abandoned vehicles on Chicago's streets. (Photo/Giovanni Velez)

According to the Department of Street and Sanitation, a vehicle is classified as abandoned if it meets one or more conditions of the following criteria:

“There's a seven-day standard but there's also a standard if it looks like it's inoperable or hazard or suffering from neglect, they can deem it abandoned,” said Joseph Schwieterman, Director of the Chadwick Institute for Metropolitan Development at DePaul University.

Ruperto Medina, a Chicago Police officer for 13 years, said the vehicles are primarily found in the South and West Sides of Chicago because of so many empty lots there.

Data from the City of Chicago Data Portal backs Medina’s estimation, as visualized by this map detailing the 1,000 most recent abandoned vehicle service requests:

Map: Concentration of the most recent 1,000 abandoned vehicle service requests grouped
heavily on the West and South Sides compared to other areas of Chicago.

Much like the disparity between locations, the same kind of disproportion exists in the color of the abandoned vehicles.

According to that same dataset, white and black vehicles are the most common with 33,471 and 32,867 respectively. Followed by the color gray rounding out the top three with 22,815.

According to Axlta, which publishes the largest annual Global Popularity Report of its kind in the automotive industry, in 2019 the most popular colors in North America were white (29%), black (19%), and gray (17%). So it makes sense that these vehicles are most likely to be seen in an abandoned state. Simply put, there are more of them on the street.

Imagine this: you’ve been walking the same way to work every day, and every day you see the same old dilapidated little car sitting on the side of the road or in someone’s yard.

You might have some questions about the car, its history, or even why it hasn’t been taken care of yet. What happens to those cars? Whose job is it to take them away? Why is it still here? Does this mean I live in a bad neighborhood?

William McCarty, the director of the Center of Research in Criminality, Law, and Justice at the University of Illinois at Chicago, said he doesn’t believe this theory holds much merit.

“I don't really see a strong support these days for like a broken windows theory, because usually those theories are centered in neighborhoods that already had these very deep problems that are more likely to be causing crime, as opposed to just the abandoned vehicles or the broken windows, so to speak,” McCarty said.

In other words, abandoned vehicles in poorer neighborhoods is a symptom of greater systemic inequality, not the root cause.

The reality of the location of these vehicles is more likely attributed to the history of Chicago’s tendency to racially segregate and divide communities.

“The poor tend to be concentrated in certain parts of the city. And that likely results in some disadvantaged areas having a much bigger problem with abandoned vehicles than more affluent areas,” Schwieterman said. “And our city is also stratified heavily on racial lines, which certainly aggravates frustration about these kinds of issues.”

The History of Towing and Chicago’s View

Before 1989, the city of Chicago had its own tow trucks, part of a city-wide move under Richard Daley to privatize city contract work.

However, this is only a part of the problem that Chicagoans have been having with private towing companies. One of the most notorious examples of aggressive and allegedly illegal towing practices is the “Lincoln Towing Service.”

According to a 1988 article by the Chicago Tribune, pedestrians were sometimes knifed, beaten with tire irons and stomped when they refused to let their vehicles be seized.

“I found that interesting to write whenever you introduce the complexity of a private business being involved in sort of a city service, you've got different priorities. That private company wants to pick up as many cars as possible, right?,” McCarty said.

However, on the matter of abandoned vehicles, these companies have no say. According to Medina, a police officer is required to fill out a tow slip declaring a vehicle abandoned.

Additionally, towing companies give some people a second chance.

“I've met a lot of ex-gang members that are working for private tow companies that have city contracts. And while it may cost more, because the city's actually paying someone, it does give the underdog a second chance of making a living for themselves,” Medina said. 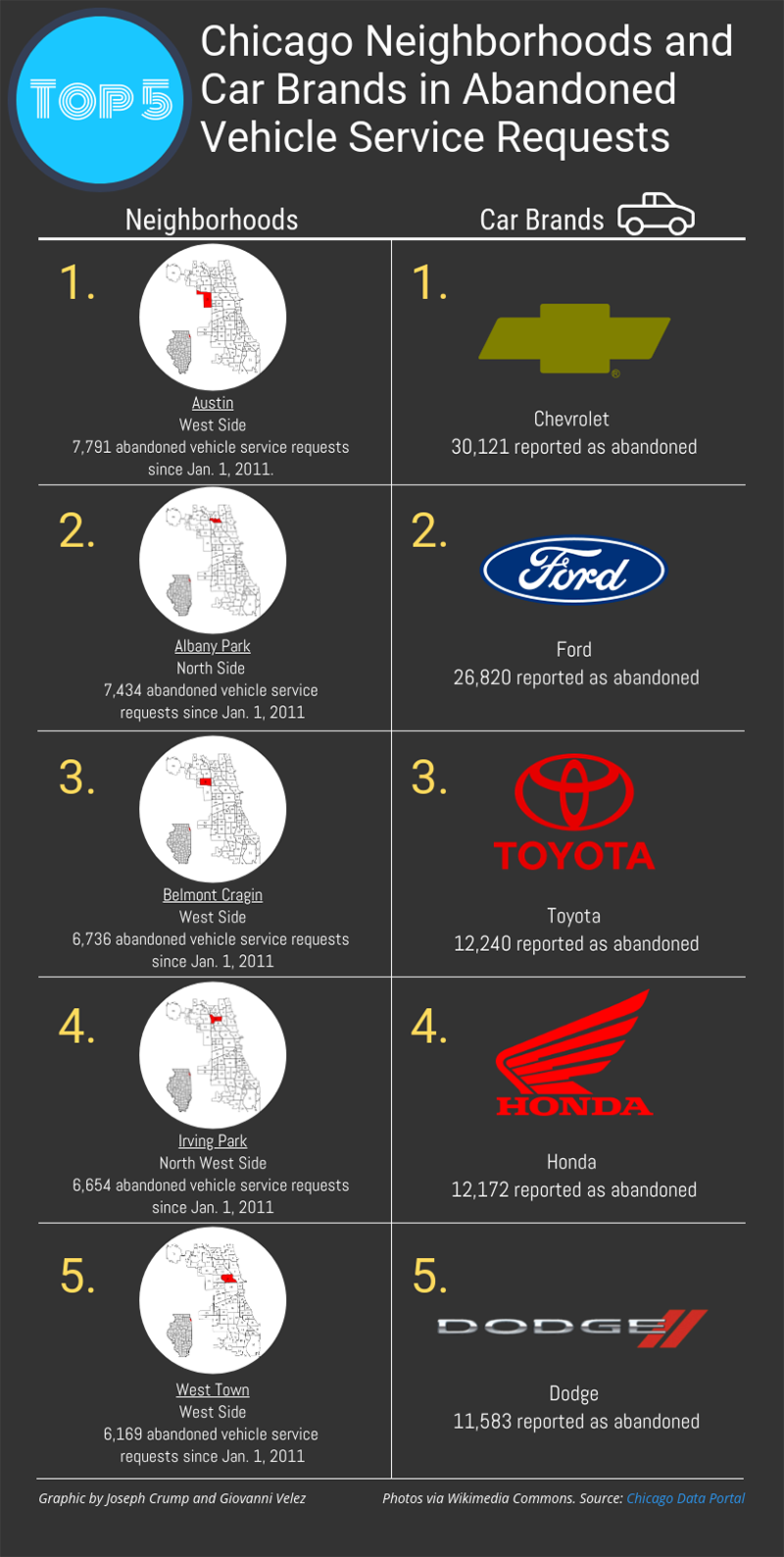