Video: Riders discuss conditions at the Sox-35th South Side stop, including track conditions.

95th/Dan Ryan Stop
Serves: Roseland, Beverly, Pullman, South Shore and thousands of Chicagoans who take buses from the southern edge of the city to the station.

The issues: The 95th/Dan Ryan Red Line station is the southern end of the line’s service. While shuttle buses will be able to take commuters to the Garfield Green Line stop for free, riders at the stop will face the longest delays resulting from the construction.

Jorge Orozco lives on the 9700 block of South Avenue L, two miles east of the 95/Dan Ryan stop. He uses the Red Line to commute to classes at Harold Washington College in the Loop. The closure will cost his entire family money and time.

“My parents have a car and will be able to drive me home from school in the evening,” he said, “but in the mornings they work. I will probably have to leave an hour or more earlier to get there on time.”

Residents commuting to and from the five-mile portion of the South Side -- where the Red Line does not currently reach -- will suffer the greatest increase in commuting time.

“It takes me at least 20 minutes to get to the [95th/Dan Ryan] stop,“ said Altgeld Gardens resident Dwayne Reynolds. “Now I’ll have to get on shuttle buses if I want to go downtown.”

Altgeld Gardens, Reynolds’ home and one of Chicago’s poorer neighborhoods, is at East 130th Street. Reynolds takes his daughter to Gwendolyn Brooks College Preparatory Academy on East 111th Street each day before getting on the Red Line to commute to work in the Loop. The increased commute time may prevent him from accompanying his daughter to school.

Chicagoan Germaine Ross commutes from the 95th/Dan Ryan station to the Loop for work. He will be forced to choose between expensive gas and parking costs and lengthy delays.

“I take the Red Line every day from 95th Street to State and Lake,” Ross said. “I have a car, but with gas and parking I would almost be working for free if I drove.”

Charles Hughes of the 9500 block of south Princeton is in a similar situation as Ross. Like many South Siders, Hughes is trying to save for a car before the closure next Spring.

“They have the Michigan bus, but that takes a long time and cuts off a lot of people,” Hughes said, “but if I can get a car before [May] I’ll be able to get by.”

The closure will be too vexing for commuters like Litha Ambrose of the south 7500 block of Vernon Avenue, who plans to quit her job before the reconstruction begins.

“I’m not going to spend an extra hour each way every day just to get to work,” said Ambrose, who commutes to work at Burger King at 130th and Kedzie. “I’m better off quitting and finding a new job once they shut [the Red Line] down.”

Several riders expressed doubts that the construction would be finished before in the proposed five months.

“There’s no way they can guarantee that the construction will be finished in five months,” Ross said. “This is Chicago, come on.”

Whether or not the construction is finished within the promised five months, commuters who depend on the 95th/Dan Ryan station will suffer the longest delays. 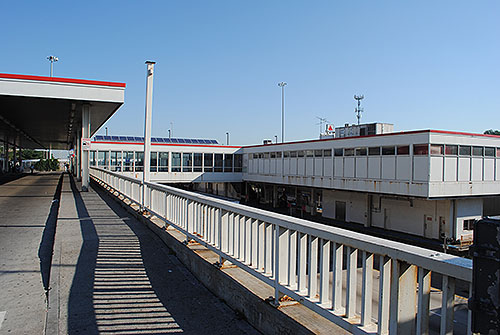 The 95th Street station could get a major makeover with savings from construction
of the South Side branch of the Red Line. (Photo by Clayton Guse)

Sox-35th Street Stop
Serves: Bridgeport, which includes U.S. Cellular Field and the Illinois Institute of Technology. It will be the second most northern stop of the Dan Ryan branch to be closed during the construction.

The issues: During the 81 White Sox home games each year, the Red Line is the primary way for fans to commute to U.S. Cellular Field. With May’s closure, fans will have more trouble getting to the games.

“The Sox are a first place team and they already have trouble filling the stadium,” said White Sox fan and Bridgeport resident Jordan Hagan. “When the Red Line closes next season it will cut off a whole chunk of fans looking to go to the games.”

While the closing will inconvenience many White Sox fans, it has a more drastic impact for Bridgeport residents like Renita Smith, who was planning to attend Northeastern Illinois University in Albany Park next spring.

“With the El shutting down the commute would not be worth it,” she said.

To avoid the lengthy commute to the Kimball Brown Line, the Line’s most northern stop, Smith plans to take classes at a City College of Chicago during the spring.

“I’m sick. I have to go back and forth from the doctor’s office,” he said. “I take two buses just to get to the Red Line. Then I take the train up to my doctor in Bridgeport.”

IIT student Tommy Holly will be able to work around the Red Line closure without much trouble.

“I will probably take the Green [Line] when the Red [Line] shuts down,” he said, “ but I will figure out a new route when I need to."

Ze Nader, a JP Morgan employee, commutes 30 minutes each day from north Lakeview to Bridgeport. The Red Line is currently his best way to get to work.

“The Red Line is fast, it’s quick,” Nader said, “The shuttle buses are going to be my only other option to get to work.”

The issues: Currently, the CTA has no plans for a shuttle bus from the 47th station to the Green Line – which could pose a major problem for commuters. Some say they plan to adapt to the closure. Others, like Bronzeville resident Kendra Mayfield, are not so optimistic.

“I have to be able to get between 47th and Chinatown quickly to work and take care of my family,” she said. “What does the CTA expect us to do? Just stop living for five months?”

Many Bronzeville commuters have more options such as the Green Line, State Street bus and Michigan Avenue bus.

“It’s not going to affect me too much on a daily basis,” said Bronzeville resident Dennis Wallace, “It’s going to be tough to get downtown, but I don’t need to commute there very often.”

Like Wallace, Bronzeville resident Anthony Robinson plans to take alternative methods of travel like the Green Line for his daily commute, yet even he is not immune from being affected by the closure.

“It’s all we’re talking about at work,” Robinson said. “I have a co-worker that takes the Red Line every day. If he’s late or doesn’t show up because of the closure that makes everyone’s job more difficult.”

Other Bronzeville residents like Natasha Morgan will deal with the delays, hoping for faster commutes in the long run.

“I will have to take a bus to the Green Line, take that to Roosevelt and take transfer to the Red to get to work at Grand,” said Morgan. “That extra hour a day for five months could pay off down the road. The train is always stopping as it is.”

After the reconstruction is complete the CTA expects the commute for South Side commuters to be quicker by 20 minutes, making the payoff for riders like Morgan worthwhile in the long run.

Garfield Stop
Serves: North Englewood as well as some Hyde Park and University of Chicago.

The issues: The Garfield Red Line stop will not have shuttle buses with free rides to the Garfield Green Line. Commuters will still have the option of the Garfield bus to get to the Green line, as well as the benefit of southbound Red Line trains running on Green Line tracks after the Roosevelt stop.

Many commuters at this stop said they are not confident in the efficiency of the planned shuttle buses, especially when it comes to avoiding tardiness at work.

“It takes me about an hour to commute to work,” said Rush University Hospital employee Jacqueline Scott, “I don’t trust the shuttle buses on the Dan Ryan. I am going to have to leave earlier and get home later.”

Hyde Park resident George Christopher commutes to O’Hare for work each day. He already realizes the pressures of an extended commute.

“If I’m late because of the Red Line construction my boss won’t understand,” he said. “I’ll get fired.”

Like many Chicagoans, Englewood resident Jeffery Lewis is saving up for a car to avoid the delays during the Red Line closure. He works two jobs and relies on the Red Line to get to both of them.

“A car would help me out a lot next spring,” he said. “It will cost me a lot more in gas and in the car itself, but all I really need is something that will not die on me next summer.”

Lewis’ situation is not uncommon on the South Side. During the closure, many South Side commuters like Lewis and Englewood resident Kay Rodgers are looking for low-cost used cars to make it through the five months of service absence.

“I could probably find a car for about $500,” said Rodgers, who commutes from the Garfield Red line to the South Loop for work every day.

“I don’t mind driving a piece of junk for the summer if it gets me where I have to go,” he said.

79th Street Stop
Serves: Greater Grand Crossing and Chatham neighborhoods.
The issues: 79th Street commuters will suffer delays just like all other Chicagoans who depend on the south branch of the Red Line on a daily basis. Yet many of the stop’s regulars remain optimistic.

“They need to do the construction,” said Chatham resident Steven Mcalvery. “It will make the train faster and create more jobs.”

The jobs created by the closure will help 79th Street commuter Sidney Jordan, who plans to have a job working on the track construction.

“The construction’s going to help me out a lot if it gets me a job,” Jordan said. “I have eight years of construction experience, and there are a lot of good workers in the neighborhoods that are being cut out by the construction. If the city employs those people, then that will help make up for the inconvenience.”

The CTA is making an attempt to do just that having already held two part-time bus operator job fairs on the South Side, which attracted more than 3,200 people.

Additionally, the CTA’s Disadvantaged Business Enterprise (DBE) has been working with the Chicago Urban League to help businesses in communities affected by the construction, Hosinski said.

The CTA is also attempting to provide track work jobs for people like Jordan, who live in areas that are affected by the construction.

“In July, CTA held a series of meet-and-greet sessions that paired DBE subcontractors with an interest in working on the track portion of the project with six potential prime contractors to help them make connections that may result in work on the South Red Line project or other projects,” she said.

The input of jobs into communities affected by the construction does not help people who rely on the Red Line to commute long distances for work, like Chatham resident Alexis Stuart.

“I would rather have them not do the construction at all,” Stuart said. “I’m going to have to spend an extra hour or two every day getting to work. The train runs fast enough for me now.”

Once the construction is complete the CTA is promising faster rides for people like Stuart that might make up for the five months of delays.