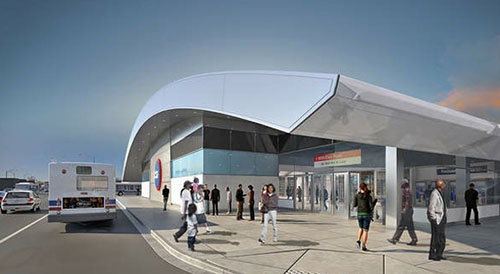 Rendering of the proposed 95th Street El stop station. Many think it will be the first
step in extending the Red Line south to 130th Street. (Graphic courtesy of the CTA)

In May, the CTA will begin a reconstruction project on the south branch of the Red Line that will stop train service for five months.

As a part of that reconstruction, the 95th/Dan Ryan stop will undergo a drastic makeover, an effort that many South Side commuters hope will be the precursor to an extension of the Red Line to 130th Street, the city’s southern edge.

“You can’t get out to the hundreds unless you get on the bus,” said 95th/Dan Ryan commuter Jay Roosevelt. “The Red [Line] goes all the way up the North Side. It’s time for the city to do the same for the South Side.

During Mayor Rahm Emanuel’s 2010 campaign, he promised to make it his goal to extend the Red Line to the southern edge of the city. The CTA has a proposed plan in place, but is awaiting city approval and funding. On Aug. 2, CTA hosted an open house to keep the public informed about the proposed extension project.

Regardless of the need for a major reconstruction of the 95th/Dan Ryan stop, commuters hope the new station will be the hub to connect the most southern parts of Chicago to the Red Line track.

While the prospect of an extension to 130th Street excites many Red Line commuters who were interviewed, some say they are not concerned about the reconstruction of the 95th/Dan Ryan station itself.

“It’s the best stop on the South Side,” said 95th/Dan Ryan commuter Litha Ambrose. “It has bus terminals [and] places to lock your bike. ”

While the 95th/Dan Ryan station might be the best stop on the South Side for commuters like Ambrose, the stop will undergo a full service of upgrades that will allow it to continue being such for decades into the future.

Station upgrades like the ones to be made at 95th/Dan Ryan are made possible by $75 million in savings provided by the five-month construction plan.

“The savings we will yield by doing this in five months will be reinvested into station upgrades along the South Red Line—including three new elevators, painting, new lighting and other upgrades,” said CTA spokesperson Catherine Hosinski.