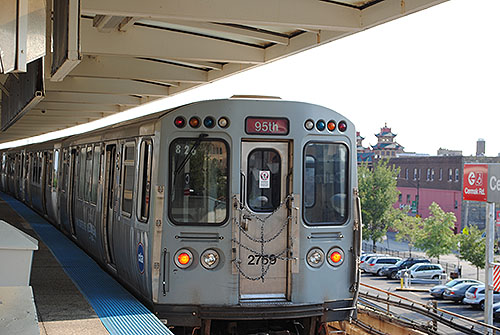 A 95th/Dan Ryan train gets ready to pull out of the Cermak/Chinatown stop.
(Photo by Clayton Guse)

In June, the CTA announced a plan to close the Dan Ryan branch of the Red Line for five months starting next May for reconstruction – a decision that has left many South Side commuters wondering how to adjust their transportation plans for nearly half a year.

The $425 million project will impact thousands of commuters, many from Chicago’s poorest neighborhoods. Some say they plan to adapt to the closure by taking CTA-provided shuttle buses. Some are saving to purchase cars. Others plan to adjust their plans for work or school.

“I’ll have to leave an hour earlier or manage to get a car,” said Bronzeville resident Paula Bryant. “Who knows if they’ll even finish the work in five months, and even then they will probably raise the fare.”

The closure will expedite track work that will include new rails and ties, drainage and safety improvements, as well as platform upgrades that will allow for the entire south branch to be handicap accessible, according to the CTA.

“Upon completion, South Side riders have a brand-new railroad from just north of Cermak-Chinatown to 95th Street, an approximately 10-mile stretch,” said CTA spokesperson Catherine Hosinski.

During construction, the CTA will be providing free shuttle buses at all Red Line stations from 69th to 95th/Dan Ryan that will take commuters to the Garfield Green Line station with free rail entry at Garfield for shuttle bus riders. Additionally, station-to-station express buses will be available between the 63rd and 95th/Dan Ryan stations.

Additionally, Red Line trains will not cut off at Roosevelt, but rather continue along Green Line tracks all the way down to the Ashland/63rd Green Line station, Hosinski said. 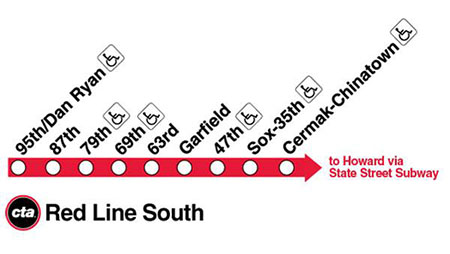 The Red Line South Branch that will be impacted by the five-month closure. (Image courtesy CTA)

But some commuters wonder if that will be enough.

Currently, 40 percent of the Dan Ryan branch requires “slow zones,” causing frequent delays. But once construction is complete, the CTA promises “faster, smoother, better rides,” that will allow for more efficient travel for the entire city.

“The bottom line is that people have got to be able to get around,” said Riverdale resident Danny Blair. “Piling people onto shuttle buses is only going to increase crime.”

This concern has not gotten past the CTA. After holding a series of community meetings this summer and working with elected officials for community input the authority has adjusted its measures.

“CTA is developing a comprehensive public safety plan for rail and bus service during the reconstruction period,” said Hosinski, “working closely with the Chicago Police Department and Office of Emergency Management and Communications.”

The five-month closure will save the city $75 million over the option of weekend closures for four years, but this decision has many South Side commuters split. Some commuters, like 79th Street commuter Marcquan Beal, would prefer the weekend closures.

“I go to school at Harold Washington [College] during the week,” Beal said. “Closing the train on the weekends wouldn’t get in my way.”

Other commuters, such as Hyde Park resident Andre Commons, said they would prefer the five-month total closure.

“I just want them to get [the construction] done with as quick as they can,” Commons said. “If it takes longer than five months, then maybe I’d like the weekend closures better, but as long as they get the train running faster I am all for it.”

The $75 million in savings provided by the five-month plan will allow the CTA to make more complete station upgrades and help provide alternative service during the construction, but the benefits do not end there.

“Performing this work via the five month plan not only saves money,” Hosinski said, “but it will also save customers and the surrounding communities three years of frustration and headaches due to frequent disruptions and changes in service every weekend.”

The construction on seven of the North Side Red Line stops requires only sporadic service delays. The CTA assures that the South Red Line reconstruction has different challenges than the North Red 7 project.

“The biggest reason is due to the different track configurations on the North and South Sides,” she said. “The South Side has just two tracks [one north and one south] while most of the North Red Line has four tracks.  Those additional two tracks could allow trains to be rerouted while construction was ongoing. That option does not exist on the Red Line South.”

Read more: Stop-by-stop: What commuters along the Red Line think of the closure