By Gio Velez and Joe Crump |

Election Day is rapidly approaching and some voters may feel ill-equipped or unprepared for what to do come Nov. 3 and how to vote.

For starters, there may be some confusion regarding registration deadlines. The deadline for  registering to vote by mail was on Oct. 6, registering online closed on Oct. 18 and in-person registration is available until the time polls close on Nov. 3.

Absentee ballots requests (mail-in votes) must be received by Oct. 29, and the return by mail must be postmarked by Nov. 3.

Early voting is available from Sept. 24 to Nov. 2, but dates and times will vary based on location.

How to Vote by Mail

To vote by mail, send an absentee voter application to your local election authority by Oct. 29. Once the ballot is received, fill out the ballot according to the instructions. Then, it must be in the mail and postmarked by Nov. 3. 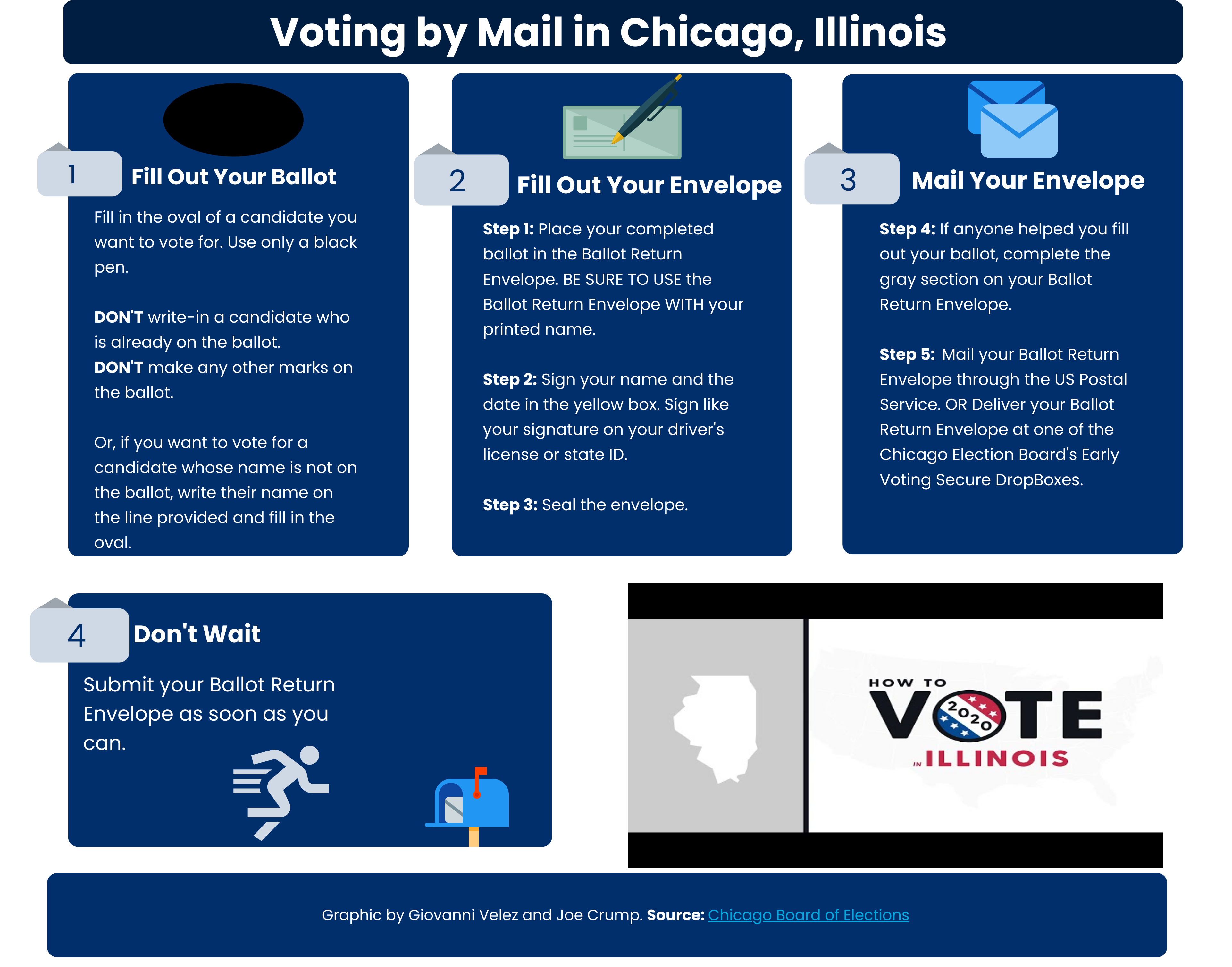 How to Vote in Person

Voters already registered in Illinois can check where their in-person polling location will be on the Illinois website. To check voter-egistration status and verify information, use Illinois’s voter registration lookup site.

New voters who registered by mail and did not provide identification (i.e. a driver’s license, last four digits of their social security number, or state ID number) will need to provide:

Voters without ID will be allowed to vote a provisional ballot and then be told how to submit proof of residence by the first Tuesday following the election.

Voter registration will be available at every polling location until polls close on Nov. 3.

Is it Safe to Vote in Person in Illinois?

The Illinois Department of Public Health (IDPH) has released guidance to protect the health of voters as they cast their ballots throughout the state during early voting and Election Day.

“While the safest way to cast a ballot this year is voting by mail,” said IDPH Director Dr. Ngozi Ezike in a news release. “We are and will continue to take the necessary steps to ensure that Illinoisans can exercise their right to vote in person, in the safest possible environments during this COVID-19 pandemic.”

All polling locations will have signage that encourages voters to wear face coverings, while maintaining a distance of six feet when individuals are inside casting their vote.

Bradley McCarey, a student at the University of Illinois at Chicago, explained why he is still voting in person this coming election.

“I do not mind going to the polling place to cast my vote,” McCarey said. “If you’re healthy and taking all precautions, there should be no concern.”

The Most Important Election of our Lifetime

Dick Simpson, a professor of political science at UIC and former 44th Ward alderman, stressed why this election is so important.

“This is probably the most important election to be held in your lifetime,” he said. “Not every election is, some of them are pretty bland, it doesn't matter exactly who wins. This one will set the agenda for the country for the rest of your life.”

Simpson recommends being active in the political process and staying informed to be the most prepared for voting.

“The more you participate, the more you become comfortable with politics and articulating your views about politics, probably, the more likely you are to vote,” said Simpson.

There are several websites that voters can use to be better informed on the election. Turbovote, Vote Smart, and the League of Women Voters are three organizations with information and guidance available to the general public.

Trail of Mail-in-Voting Leads to … Oregon?

The state of Oregon has the longest history of voting by mail in the United States. The state started voting-by-mail in 1987 and has exclusively done so since 1998. However, this change to exclusivity was first met with some resistance.

According to The Atlantic, in 1995 the Republican-controlled Oregon legislature  passed a bill that would ratify vote by mail for all types of elections. The former democratic governor, John Kitzhaber, vetoed the vote-by-mail bill. He argued that it was too early for the state to adopt such extreme electoral reform without further study.

However, after senator Bob Packwood resigned, the opening for more evidence soon became available. In the December primary of 1995 and the January 1996 general election, voting-by-mail was used to fill his seat.

The Oregon League of Women voters led a successful petition to put a vote-by-mail measure on the 1998 general election ballot. The measure won 67 percent of the vote.

Pricilla Southwell, a political science professor who has been teaching at the University of Oregon since 1982, explained why vote-by-mail is so popular among Oregon voters.

“There's all these people that have something unexpected happen on Election Day, this is before vote by mail. Their grandmother breaks a hip, they have a sick child, their car doesn't start,” said Southwell. “It is very, very popular among Oregonians, they have gotten used to this, because it makes it very easy to vote.”

The Myth of Voter Fraud

President Donald Trump has been casting doubt on mail-in voting. However, mail-in, or absentee voting, has been used by the military since the Civil War.

According to the Pew Research Center, 52 percent of U.S adults view voter fraud as a problem in U.S presidential elections. Contrary to the fact that there were only four documented cases of voter fraud in the 2016 election as reported by the Washington Post.

“It really shouldn't [worry the voter]. I mean, Oregon has done this since 2000. So we've probably sent out about over 250 million votes,” Southwell said. “And there have been two documented cases of voter fraud where the person was actually in some way prosecuted.”